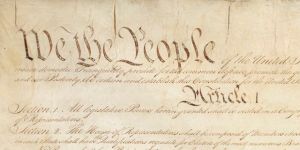 Most Americans are taught from an early age that free speech is essential to a free society. This is true.

Unfortunately, we aren’t usually taught what “free speech” means. We get intensely nervous whenever someone says the word “censorship” to the point that people use it to manipulate us into things we’d never do otherwise. An example is people claiming that advertisers must buy ads on Rush Limbaugh’s show or else they’ll cause the downfall of the freest country on earth. (The geek equivalent usually involves a mailing list and misogyny or homophobia.)

The fear that we’ll end up a repressive autocratic state is a major one, and rightly so. But the stuff that people think they have to defend – forcing a private entity to publish speech it finds objectionable – is not what protects us from that fate.

Here’s what free speech actually means in the U.S. and how it protects us:

I hope that made sense. The main message I want to get across here is that you don’t have to allow people to say anything they want on your turf in order to preserve your freedom and your system of government. Your conference, mailing list, or company can ban or punish or delete whatever it wants without compromising the integrity of our country. Free speech and its power to keep us safe will continue to work even if we refuse to allow hateful commentary in our communities.